The Wall: How could it affect ESTA visitors? 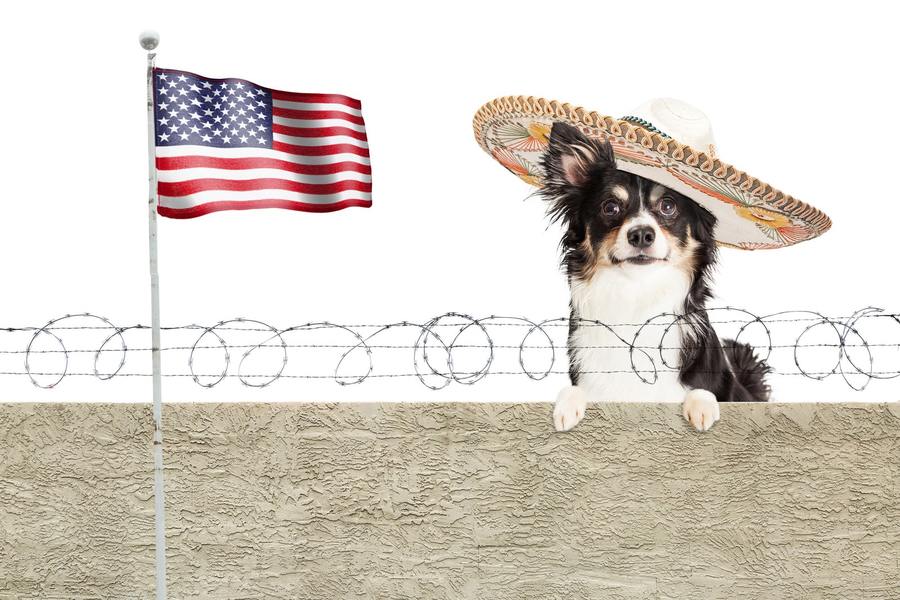 Perhaps President Trump’s most famous, disputed and celebrated campaign proposal was the famous ‘wall’. After countless reiterations of “We’re gonna build a wall”, are we starting to see the first phases of a new physical boundary between the USA and Mexico?

It’s worth saying at this point that, wall or no wall, citizens of countries that form part of the Visa Waiver Program will still be able to travel freely between the USA and Mexico with the ESTA, but more on that later.

At the end of August, four companies were selected from over 200 to design prototypes for what they believe the wall should be. So far, US Customs and Border Protection have commissioned four concrete prototypes, nine meters long and up to nine meters high, for around half a million dollars each. In the next few days, another four contracts will be drawn up for prototypes made from other materials.

Over the next few weeks, the companies selected will be given the go ahead to start building their prototypes, and will have a month to construct them. So this leads many of us to wonder, how much work can really go into building a wall? Well, there are a few basic requirements…

First of all, as is commonly a desirable feature of a wall, it needs to be impossible to climb over or scale with a ladder. As well as being tall, this means they need to have certain features in place that prevent scalability. On the other end, it’s also important for there to be something in place to prevent people from being able to dig under the wall and tunnel their way to the other side. Tunneling is a common way for people to access the USA from Mexico, and as many as 224 tunnels have been discovered since 1990. In fact, just last month a new tunnel was discovered, primarily being used to traffic Chinese migrants into the USA.

Beyond being able to get over or under the wall, US Customs and Border Patrol also need to be sure that nobody can get through the wall. This means that it needs to be robust enough to prevent people from being able to use tools to literally break their way through it. After the prototypes are built, officials will conduct tests to see how possible it is to tamper with them or penetrate them, using small hand tools. This is because, in existing sections of the physical barriers in place, wire cutters have previously been used to remove barbed wire and holes have been dug around vulnerable parts of the wall.

And yet despite the impenetrability that the wall needs to offer, many people have also spoken out on the environmental impact this would inevitably have. For this reason, some initial proposals suggested a gap at the bottom of the wall to allow native species to continue living in their usual habitat.

Another request was that the designs be somewhat aesthetically appealing, at least from the United States side… Whilst a wall can only be so pretty, this included certain ironic proposals (which did not make the cut). For example, a Mexican design firm’s proposal was a giant hot pink wall that stretched the full 1,954-mile stretch from coast to coast. The pink eye-sore was dubbed the ‘Prison-Wall’, and incorporated a prison for immigrants that could hold the 11 million people that Trump plans to deport.

On a more serious level, if a wall is really going to be built, the wide geographical variations pose a serious obstacle for the engineers involved. For the last few months, soil samples have been collected from various spots along the border to establish which barriers would be most effective in different locations. For example, a stretch of desert would have different requirements to mountain areas or forest.

The concrete prototypes will be built along existing stretches of border walls in San Diego. As it stands, the ‘Mexico-United States barrier’ incorporates a range of unconnected walls. This mainly consists in steel walls, chain-link fences and steal beams to prevent vehicles from driving across the border. In between these barriers, there is a ‘virtual fence’, which uses a system of cameras and sensors to detect illegal crossings. There are currently around 580 miles of physical wall in place, which represents just over a quarter of the full border. By building the prototypes around existing sections of wall, the CBP will be able to test which barriers are most effective in giving agents time to respond to smuggling reports (drugs and people).

So, as we wait to see what these prototypes will look like, as well as the other designs that will be moved forward in the coming weeks and months, all we can do for now is speculate. However, it’s worth looking at some of the ideas (some more serious than others) that did not make it so far in the process. For example, one of the more curious pitches was a one-way sheet of plexiglass along the border. The idea behind this is that it would be possible to see through the wall from the United States, but from Mexico it would serve as a mirror.

Another more humanitarian proposal was to open a ‘border park’, instead of a wall. The national park would be co-run by both the USA and Mexico, serving as a shared resource for both. The main concept behind this was to destigmatize the border, promote inter-country communication and more respect for both sides.

Other ideas included a waste-storage feature. Essentially, this option would have included a 100-foot-deep trench, used to store nuclear waste, among other kinds of waste. There would be facilities in place to convert the waste into electricity, along with a railroad. In fact, several proposals incorporated transportation into their designs in some way. Another pitch was for a monorail on the top of the wall stretching the full length of the US-Mexico border, as well as a shopping mall. Meanwhile, another group of engineers suggested a more space-age hyperloop transportation network. This design suggested turning the border into a shared nation, known as ‘Otra Nation’, with an independent local government, representatives in both US and Mexican legislatures and a number of solar farms in place to power the hyperloop. The $1-trillion-dollar price tag may have played apart in this proposal’s exit from the consideration process.

And speaking of money, it’s hard to fathom quite how much money will need to go into this wall. Trump himself estimated the cost at between $8 and $12 billion dollars, while other suggestions were more in the range of $8 to $12 billion. In terms of actual money on the table, $1.6 billion was recently approved for the wall’s construction, however this would only fund 74 miles of it!

Anyway, over the next few months we will see how the physical prototypes progress. As for the actual purpose of the wall, the idea behind it is to prevent illegal immigration and contraband from being imported into the United States. In this regard, those with valid travel authorization will not be affected by the new barrier.

All citizens of countries that are members of the Visa Waiver Program are entitled to apply for ESTA online. With ESTA authorization, travelers can visit the USA for periods of up to 90 days a time for tourism or business. As part of the ESTA initiative, travelers can visit Mexico during their trips. Any time spent in Mexico then contributes to this 90-day timer, making it perfectly possible to incorporate a few days in Mexico as part of a trip to North America. Likewise, on the other side of the US, visitors can use this same system to take a quick trip into Canada. Mexico and Canada are the only countries that use this system, and so as soon as a traveler goes to any other country, this 90-day timer is reset.

The ESTA makes travel to the US easier and cheaper, and the whole process is carried out online. It is an alternative to the more traditional route of applying for a US visa, which entails physical meetings in a US embassy or consulate, as well as prolonged waiting times. With the ESTA, applicants are informed of their approval status within 24 hours via email. As soon as they receive a confirmation that their ESTA has been approved, they are free to travel to the USA under the Visa Waiver Program.