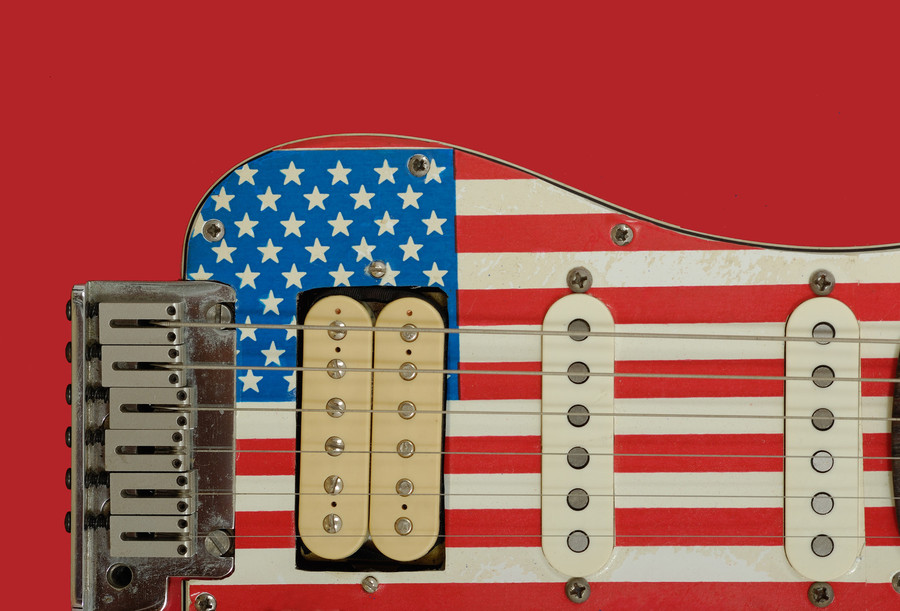 This series will look at how the ‘Land of the Free’ is portrayed in popular culture.

Few places on Earth are personified quite as much as the United States, which has seen the tapestry of its very character analysed, celebrated, glorified and sometimes scrutinised through all platforms possible. Visiting the USA will give you your very own snapshot of the country, and is particularly easy to achieve when traveling with ESTA under the Visa Waiver Program, but it will almost certainly be influenced by all that you have seen and heard about the USA already.

This series will look at how the ‘Land of the Free’ is portrayed in popular culture. In this article, we’ll be looking at popular music and what it says about the country. While a plethora of songs have been written to comment on all aspects of American life, this short selection focuses on a celebration of patriotism and national pride. Nevertheless, some of these songs also flip the scales, and speak of a struggle or negative component of this almighty nation, yet always with a positive undertone.

With this in mind, where better to start than the national anthem itself?

What is surely one of the most globally recognised national anthems on the planet, the Star-Spangled Banner is undoubtedly one of the most atmospheric. The melody taken from an old British song and the lyrics from a 19th century poem, the anthem sings of the War of 1812 during the Battle of Fort McHenry, as British ships bombarded the fort. The focus of the song is a large American flag, also known as the Star-Spangled Banner, waving in triumph at the time of the US victory.

Though the anthem has many verses, we tend to hear just the first, which captures the essence perfectly. Emblematic lines include ‘Whose broad stripes and bright stars through the perilous fight // O'er the ramparts we watched, were so gallantly streaming?’, and ‘O say does that star-spangled banner yet wave // O'er the land of the free and the home of the brave?’. With such powerful words, the melody alone is now sufficient to signify the spirit of the entire piece. In fact, one of the most famous versions of the song is that of Jimi Hendrix, who performed the piece at Woodstock with just his electric guitar screaming the patriotic melody.

Born in the USA (Bruce Springsteen)

Released in 1984, Bruce Springsteen’s iconic song may appear to be a song of American pride on the surface, but the lyrics of the verses tell another story. The very first line of the song, ‘Born down in a dead man’s town // The first kick I took was when I hit the ground // End up like a dog that's been beat too much // Till you spend half your life just covering up’ serves as the introduction to a song that really talks about American veterans upon returning from Vietnam, and the effects of the war on the American people.

The critical nature of the song’s verses is contrasted with a chorus that provokes pride in being American, simply by repeating ‘I was born in the USA’, time and time again. Indeed, Springsteen’s live performances of the song have always been greeted with waving flags, as the crowd unites in a message about core American values.

The unique sound of James Brown is put to great use in this song of excitement and celebration. The singer’s enthusiasm for living in the USA, ‘Livin’ in America – hand to hand, across the nation // Livin’ in America – got to have a celebration’, is justified by singing of the country’s interconnectedness and communal spirit. With his signature funky rhythm to establish a groovy and uplifting feel, Brown sings of ‘super highways, coast to coast, easy to get everywhere // on the transcontinental overload, just slide behind the wheel, how does it feel?’, before joyously insisting that he lives in America, and he knows what it means!

The song was released in 1985, and was written for the film Rocky IV. Nevertheless, aside from the success of the film itself, the song became a major hit in both the USA and the UK, and has become a timeless example of enthusiasm for the USA.

The duo’s 1968 song speaks of a road trip across America, shared between Paul Simon and his girlfriend. The couple boards a Greyhound bus across the country, starting out with an optimism for what they may discover: ‘Let us be lovers, we'll marry our fortunes together’. However, as the song progresses, the literal road trip takes on a figurative interpretation. As his girlfriend falls asleep in the song, Simon is left to reflect alone, staring out of the window and observing the journeys of lost souls wandering the great American highway.

Looking for America in a physical sense becomes a search for its lost beauty and ideals, seen from the perspective of young optimism: ‘Kathy, I’m lost – I said, though I knew she was sleeping // I’m empty and aching and I don’t know why’. The power of the song builds up right to the end, as Simon feels a shared sense of desperate searching with his fellow highway wanderers: ‘They’ve all come to look for America’.

Party in the USA (Miley Cyrus)

Having so far dealt with only 20th century classics, this song is an appropriate reminder that the USA remains a popular topic for contemporary artists. With nothing but a young and happy vibe to the song, Party in the USA simply paints a picture of the singer’s experience of relocating from Nashville to Los Angeles.

Despite the singer’s nerves and anticipation upon arriving at Los Angeles airport: ‘Welcome to the land of fame, excess, whoa! Am I gonna fit in?’, the chorus soon reassures the listener that everything is going to plan: ‘Got my hands up, they’re playin’ my song, and now I’m gonna be okay // Yeah, it’s a party in the USA!’. Having been a global hit in eight countries, the song’s party nature alone is enough to capture a lively, positive aspect of the United States.

Another contemporary portrayal of American life, American Idiot is a catchy punk-rock song that is both celebratory and critical. The band’s singer presents a somewhat ironic perspective of how he feels US media spreads paranoia among the nation and a reduced ability to form individual opinions: ‘Now everybody do the propaganda // and sing along to the age of paranoia’. Despite what, on the surface, may be viewed as an angry commentary, a slightly deeper reading of the song can also be viewed as constructive and positive. The singer’s insistence in the chorus: ‘Don’t wanna be an American idiot // One nation controlled by the media’ is a call for individuality and identity; positive encouragement for Americans to be themselves.

Nominated for five Grammies and successful across the globe, the song is considered to be one of Green Day’s signature pieces.

Traveling to the USA (All citizens of Visa Waiver Program countries)

The specifics of traveling to the USA with ESTA under the Visa Waiver Program have not yet been expressed in song, perhaps owing to the simple, uncontroversial nature of the program. Nevertheless, when such a ballad does hit our radios, we imagine the chorus will go something like this: ‘If you’re ready to explore the USA // With ESTA you can be approved in one day // Simply fill in the online application // Then you’ll receive travel authorization’. It’s a working progress, but the major labels are bound to pick it up sooner or later.

The Visa Waiver Program became a global success from the time of its ‘release’ in the late 1980s. Having remained in the travel charts ever since, the program’s Electronic System for Travel Authorization (the ESTA) is a mega hit in 38 countries, whose citizens can use the ESTA to visit the USA for periods of up to 90 days at a time. The efficiency of the ESTA has knocked the traditional visa out of the international charts, as it means that applicants do not have to request an appointment in a US embassy or consulate, nor do they have to wait weeks, or even months, to receive their travel authorisation.

Whatever interpretation you get from American music, there’s no better way to get a feel for the USA than by visiting it for yourself. Apply for ESTA online today and book tickets for your own nationwide tour of the USA.